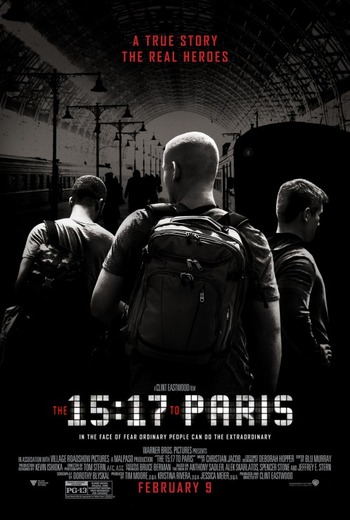 The 15:17 to Paris is a 2018 film produced and directed by Clint Eastwood and written by Dorothy Blyskal, based on the autobiography The 15:17 to Paris: The True Story of a Terrorist, a Train, and Three American Soldiers by Jeffrey E. Stern, Spencer Stone, Anthony Sadler and Alek Skarlatos.

The film chronicles the 21 August 2015 terrorist attack onboard a Thalys train between Amsterdam and Paris with a stop in Brussels (the terrorist got onboard there and the train left at 15:17, hence the title) and the heroic action by three American tourists, who happened to be soldiers, to stop it.

The film stars the three Americans — Stone, Sadler and Skarlatos — as themselves. Additional cast includes Judy Greer and Jenna Fischer.