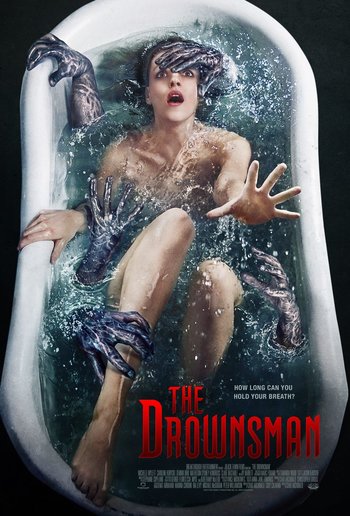 The Drownsman is a 2014 Canadian horror/fantasy thriller written and directed by Chad Archibald, starring Michelle Mylett (better known as Katy on Letterkenny) and Caroline Korycki.

A near-death experience in a lake leaves Madison (Mylett) with extreme hydrophobia. It's grown so bad that she's unable to attend her best friend Hannah's (Korycki) wedding because of the rain, as Madison believes that a sinister figure known as the Drownsman (Ry Barrett) will pull her into his world and kill her. In their attempt to help her, Madison's friends try to hold a séance to make contact with this being and find that Madison is being haunted by Sebastian Donner (also played by Barrett), a serial killer that loved to listen to his victims' hearts beat as they slowly died. However the group soon finds that their attempts to help Madison has caused the Drownsman to notice them as well and he begins to pick them off one by one.

This horror film provides examples of the following tropes: