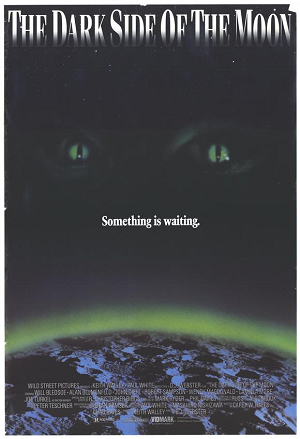 The year, 2022. The maintenance ship SPACECORE 1 is on a routine "refab" mission. The refabs are fixers. Their purpose is to repair nuclear-armed satellites orbiting high above the earth. Due to the atomic capabilities of these satellites, refabbing is considered dangerous... Very dangerous.
Advertisement:

The Dark Side of the Moon is a Sci-Fi Horror film made in 1990 starring Joe Turkel and John Diehl. The ship Spacecore 1 mysteriously loses power while on a routine maintenance mission of nuclear-armed satellites. Miraculously they find a drifting space shuttle that is over 30 years old where they can replenish their oxygen. They also find aboard the corpse of its single pilot. What follows is a string of possessions, murders, paranoia and the mysteries of The Bermuda Triangle and the ultimate source of evil.

Not to be confused with the legendary album, or the French mockumentary released in English-speaking markets as Dark Side of the Moon.

The Dark Side of the Moon provides examples of:

Alternative Title(s): The Dark Side Of The Moon