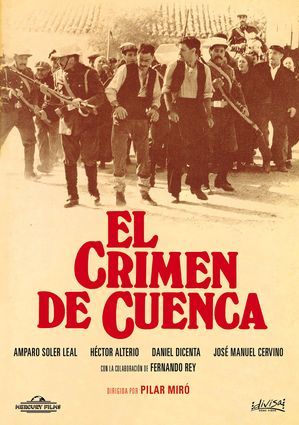 When I told the truth, you didn't believe me. But when I lied, they did.
—León
Advertisement:

The Cuenca Crime (original title: El Crimen de Cuenca) is a classic 1979 Spanish Crime And Punishment film with a twist: There is a lot of punishment, but the crime is not a crime at all.

The film is based on the Real-Life "investigation" of the 1910 disappearance of simple shepherd José María Grimaldos a.k.a. El Cepa ("The Stump") in a small village of Cuenca province. When a dying landowner accusses his two employees, Gregorio and León, of murdering Grimaldos, the newly appointed Hanging Judge, Isasa, takes upon himself to make them confess by all means possible. By this we mean the most horrifically graphic Cold-Blooded Torture. During their ordeal, Gregorio and León are broken both in body and spirit, lose everything, and are compelled to confess in order to avoid the death penalty, all while believing that their once best friend roped them into paying for a crime they didn't commit.

Considering its production and intended release in 1979, shortly after the end of the the Franco dictatorship, and its onscreen gore, nudity and villainous portrayal of judges, conservatives, landlords, priests and civil guards, the movie was guaranteed to run into trouble. It sat specially bad with then sitting Minister of Culture Ricardo de la Cierva, a holdover of the dictatorship who, in a case of Life Imitates Art Imitates Life, ordered the film pulled and its director, Pilar Miró to be tried by a military tribunal for slandering the Civil Guard, the only time this happened in post-Francoist Spain. However, the case was thrown before trial when it was ruled that no crime was possible due to all film censorship having been abolished in Spain in 1977.

The film hit Spanish theatres at last in 1981. Despite its limited August release and an 'S' rating (equivalent to the American 'R'), it absolutely broke the national box office helped by a great dose of the Streisand Effect. It also established Miró as a film director, as she had almost exclusively worked in television before.