Film / The City Without Jews 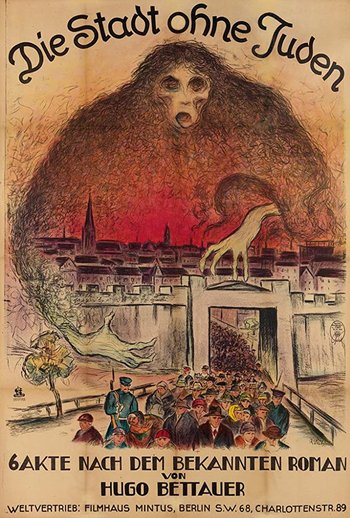 The City Without Jews (German title: Die Stadt ohne Juden) is a 1924 expressionist Austrian silent film directed by Hans Karl Breslauer. It was based on the novel of the same name by Hugo Bettauer, released two years earlier.

The movie takes place in a Fictional Country called the Republic of Utopia, which bears a suspicious resemblance to Austria in the early 1920s. Contray to its name, Utopia is not a utopia. In fact, it's in the midst of an economic crisis, with hyperinflation spiraling out of control.note Although it's the Weimar Republic that's infamous for hyperinflation, it also occured in Austria during the same period. Anti-Semitic rabble-rousers insist that those dastardly Jews are obviously to blame for this, and the government decides to expel the Jews. That's bad news for Lotte Linder and her Jewish boyfriend Leo Strakosch, who will now have to be separated. The Jews are sent away to live in "Zion," apparently present-day Israel, but Leo sneaks back into Utopia, disguised as a French Catholic, so that he and Lotte can continue to be together. Meanwhile, without the Jews, Utopia's economy craters. Eventually, the government realizes its mistake, votes to let the Jews come back, and everyone lives happily ever after.

The City Without Jews wasn't really warning about the rise of Nazi Germany in particular (Nazis were politically irrelevant in 1924), but was rather about antisemitism in general, which always seems to be politically relevant. The film was a commercial success at the time, although it's often been criticized for soft-pedaling the novel's anti-racism message, and Hugo Bettauer disowned the film (probably out of this). Still, the movie was anti-racist enough to piss off the nascent Nazi movement, who frequently protested it, often violently. Bettauer himself was murdered by a young Austrian Nazi party member in 1925.