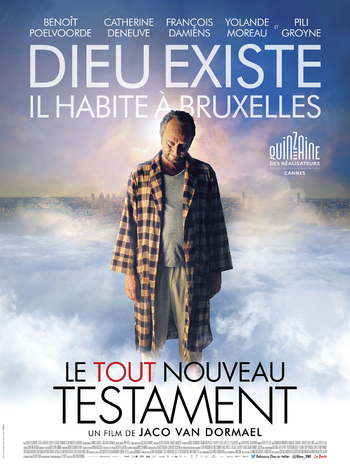 God exists. He lives in Brussels. He is a scoundrel.
Advertisement:

The premise is that God (Benoît Poelvoorde) lives in Brussels and is a bitter, mean supreme being that spends most of his days terrorizing his wife (Yolande Moreau) and his daughter Ea (Pili Groyne) and otherwise inventing new ways of making the life of humans miserable.

This changes after one day, Ea sneaks into his office and sends to every human a text that reveals the exact moment of their death. She then proceeds to flee her home (through a washing machine) to gather her apostles and announce her Gospel (just like her big brother JC did).