Film / The Bones Brigade An Autobiography 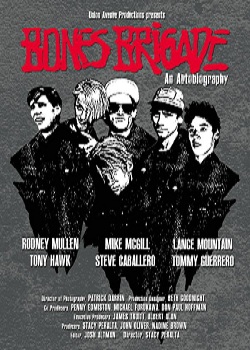 from top left to right: Rodney Mullen, Tony Hawk, Mike McGill, Lance Mountain, Tommy Guererro. Bottom: Steve Caballero
"They weren't just guys who dominated competition, but they were also skateboarders who invented some of the most revolutionary maneuvers out of that entire decade."
—Stacy Peralta
Advertisement:

In the 70s, Stacy Peralta was at the top of his game when he and his team, the Zephyr Skateboard Team, won the freestyle competition by pulling surf maneuvers on a skateboard. However, just as the team enjoyed the success they'd achieved, it dissolved almost immediately. From that day forward, Stacy wanted to create a dream team that not only was great but also lasted long, made up of young amateurs with great potential who nobody ever heard of to get them to progress further. He consulted his creative cohort, Craig Stecyk III, about how to name this brand new team without the word 'skateboard' or 'team'. Craig shrugged and answered 'Bones Brigade'.

Thus, a team of legends was born.

Distributed by Vans and produced by Union Avenue, this is a documentary on The Bones Brigade, mainly focusing on four of its original skaters: Tony Hawk, Rodney Mullen, Steve Caballero and Lance Mountain, as well as other skaters like Tommy Guerrero, Mike Vallely and Mike McGill; it takes the viewer into Stacy Peralta's creation of the Powell-Peralta company after the sudden disbanding of the Zephyr Skateboard team, and the start of the Bones Brigade, their rise to fame, their revolutionary contributions to the skateboarding community and the emotional roller coaster of each individual skaters.

You can buy the digital version of the documentary among other things, including reissues of the skater's classic decks, here

The Bones Brigade: An Autobiography provides examples of: