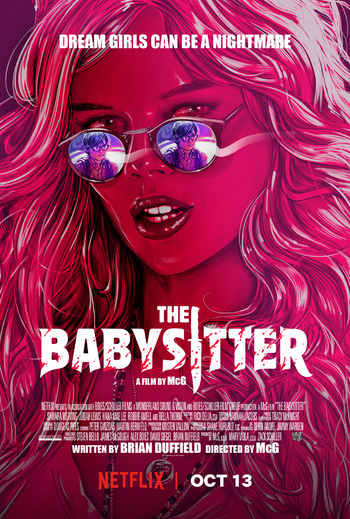 "Things get messy when you make a Deal with the Devil."
— Bee
Advertisement:

It tells the story of a twelve-year-old boy named Cole Johnson (Lewis) who is constantly bullied, but is very good friends with his hot babysitter Bee (Weaving). One night, while his parents are away in a hotel, Cole stays up to see what Bee does after his bedtime... which turns out to be Human Sacrifice. From then on, it’s a battle for survival between Cole and the cultists. The movie's comedic elements are very strong, to the point that it might be considered a parody of the genre.

It was released by Netflix on October 13, 2017. Not to be confused with the 1980 Made-for-TV Movie of the same name starring Patty Duke and William Shatner.

A sequel, The Babysitter: Killer Queen was released on September 10, 2020 on Netflix.