Film / The Assassination of Jesse James by the Coward Robert Ford 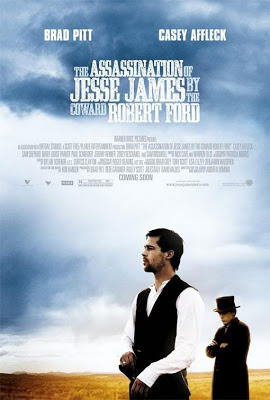 "I look at my red hands and my mean face. And I wonder about that man that's gone so wrong."
— Jesse James

The Assassination of Jesse James by the Coward Robert Ford is a 2007 American western film, and the second film directed by Andrew Dominik, best known for Chopper. It is based on the 1983 book by Ron Hansen of the same name. Punk rocker Nick Cave provides the soundtrack and appears in a minor role. The film, mostly set 1881-1882, tells the story of the final days of Jesse James (Brad Pitt) as he descends into aimless ennui and murderous paranoia, as well as the rise and fall of Robert Ford (Casey Affleck), a sycophantic fanboy of James's desperate to make a name for himself.

The film is a Deconstruction of the James myth, as a man normally portrayed in Hollywood as a romantic Robin Hood-esque Anti-Hero is here (much more accurately) shown as a cold, dangerous, paranoid, Ax-Crazy lunatic. Meanwhile, the normally vilified Robert Ford starts off with an unsettling hero-worship towards James, but gradually becomes disillusioned with — and eventually terrified of — the infamous outlaw.

Despite being a massive critical hit, the movie bombed at the box office. The film is long, scenes are intentionally drawn out, and it goes out of its way to debunk established popular Hollywood History, all of which ran against it. However, the music, cinematography, and especially the performances by the two leads (Affleck even got an Oscar nomination for Best Supporting) are held in high regard, and it made the Top Ten Movies of the Year of several critical lists (sometimes even topping them).