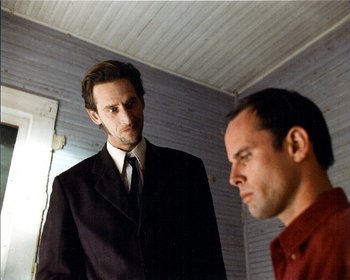 The Accountant is a 2001 short film (38 minutes) written and directed by Ray Mc Kinnon.

Tommy O'Dell (Walton Goggins) and his brother Eddie have a family farm somewhere in the American South. The farm is not doing very well, and the brothers have a lot of debt. Tommy, inspired by a neighbor who lost an arm in a farming accident but got a large settlement, decides to commit some insurance fraud to bail the farm out.

Enter the accountant (McKinnon), a specialist in fraud brought in by Tommy to help the brothers decide what to do. After examining the books and finding that the brothers owe over $277,000, the accountant starts considering various ways of bailing the brothers out. Burning down the house is considered but dismissed because Eddie needs the house to live in. Arranging some sort of horrible accident to maim Eddie is rejected by Eddie. That leaves the most radical option—murder Eddie's wife for the insurance money. As the accountant reveals to Eddie, he has discovered, from a couple of subtle clues in the books, that Eddie's wife is cheating on him.

No connection to that movie with Ben Affleck.