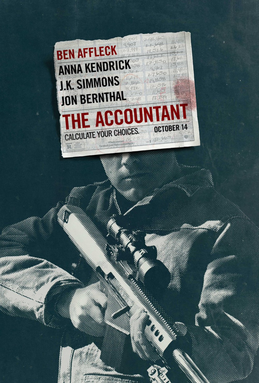 "Imagine the secrets this guy has."
"Can our son lead a normal life?"
"Define 'normal'."
Advertisement:

Meet Christian Wolff (Affleck), a high-functioning autistic accountant for various dangerous criminal organizations. A mathematics savant, Wolff gains a client in the form of a state-of-the-art robotics company and ends up caught in a web of conspiracy. Things especially turn for the worse when his protegée Dana Cummings (Kendrick) discovers things that would make her a target. But Wolff is very much prepared to deal with such troubles... in most lethal ways.

A sequel is currently in production with Ben Affleck attached to reprise his role.

, and the second here

The Accountant provides examples of:

"I guarantee you, if we let the world set expectations for our children, they'll start low, and they'll stay there. Maybe your son's capable of much more than we know. And maybe, just maybe, he doesn't understand how to tell us. Or we haven't yet learned how to listen."
Feedback

Christian saves Dana from a couple of goons who try and kidnap her.

Christian saves Dana from a couple of goons who try and kidnap her.