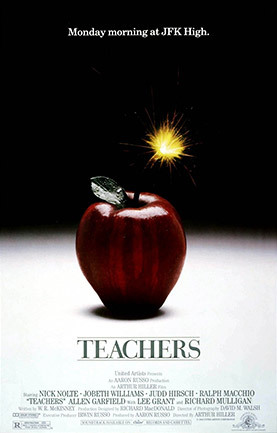 Dr. Donna Burke: Just what the hell are you guys running here, a goddamn zoo? I'm in the middle of a fundraiser breakfast when I'm informed that your school psychologist has flipped out in the middle of your goddamn office. And, then I get here and find out that there has been a stabbing, and if that's not enough, one of your kids tries to eat one of your goddamn teachers. Mr. Rubell, what the hell do you call that?
Advertisement:
Roger Rubell: Monday.

Teachers is a 1984 satirical dramedy film directed by Arthur Hiller.

It's an average day at John F. Kennedy High School in Columbus, Ohio: Fights in the hallways, a stabbing, 10% of teachers failing to even show up, and lawyers in the office chomping at the bit with depositions.

After the school psychologist has a mental breakdown, Alex Jurel (Nick Nolte) is tasked with the job and his first task is helping delinquent Eddie Pilikian (Ralph Macchio).

Among the supporting players are Crispin Glover as Eddie's bullied best friend, Laura Dern as one of the popular students, Judd Hirsch as the school principal, Richard Mulligan as a psychiatric hospital inmate turned history teacher, JoBeth Williams as a lawyer for a recent graduate who's suing the school for giving him a diploma even though he can't read, and Morgan Freeman (in an early film role) as a lawyer for the school.