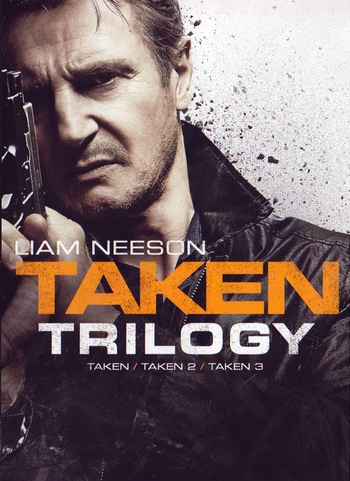 Kim: Mom says your job made you paranoid.
Bryan: My job made me aware.
"I don't know who you are. I don't know what you want. If you are looking for ransom, I can tell you I don't have money. But what I do have are a very particular set of skills; skills I have acquired over a very long career. Skills that make me a nightmare for people like you. If you let my daughter go now, that'll be the end of it. I will not look for you, I will not pursue you. But if you don't, I will look for you, I will find you...and I will kill you."
— Bryan Mills
Advertisement:

Taken is a series of French action thriller films starring Liam Neeson and produced and written by Luc Besson; the first movie, released in 2008, was directed by Pierre Morel, and the sequels by Olivier Megaton.

Neeson plays Bryan Mills, an ex-special forces commander who starts the series having taken up the job of being a bodyguard to help pay the bills and attempting to reconnect with his estranged daughter Kimmy (Maggie Grace), who lives with her remarried-to-a-millionaire mother Lenore (Famke Janssen).

Kimmy is kidnapped by Albanian sex-traffickers on a trip to Paris on her 17th birthday. Afterwards, Bryan gives his daughter's captors the famous courteous warning depicted in the page quote via phone call, advising them to let her go and avoid the horrible fate he has in store for them. They ignore his warning.

Unfortunately for them, Bryan was not bluffing when he claimed to be frighteningly skilled, as he proves to be an old warrior whose viciousness would make Jason Bourne seem like a pussycat in comparison. Hell hath no fury like a father protecting his daughter, as the underworld of Paris soon learns the hard and painful way. At times, Bryan's exacting of revenge turns film into an inadvertent Black Comedy, albeit of an extremely sadistic kind.

In the first sequel released in 2012, Taken 2, the stage is moved to İstanbul, with the families of the first movie's band of sex slave traders seeking revenge by kidnapping Bryan and his ex-wife while they are on a vacation there with Kim. Neeson was then paid $20 million to come back

A prequel miniseries to the first movie began airing in 2017, dealing with Bryan's past in the armed forces. It lasted for two seasons before being cancelled in mid-2018. 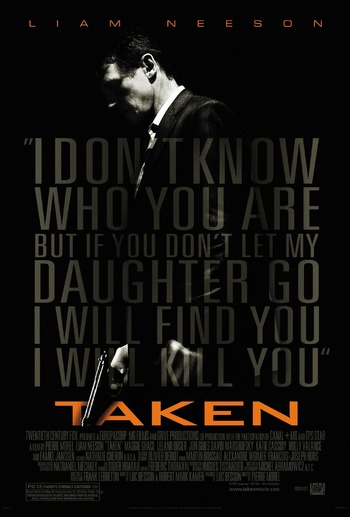 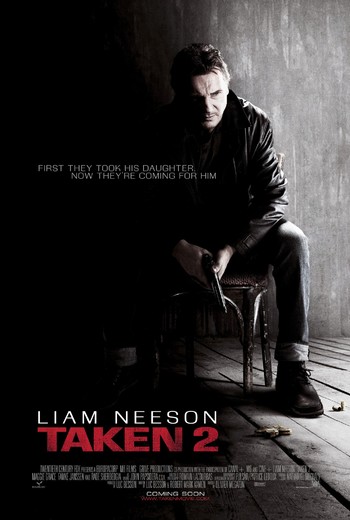 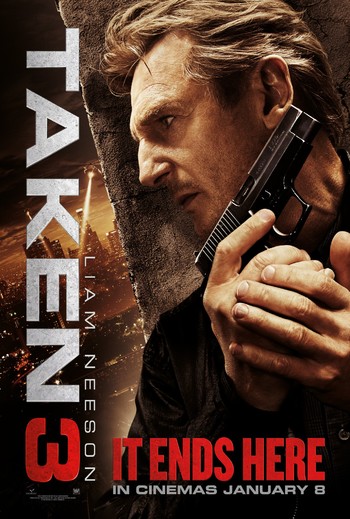 Franck Dotzler: You may very well be innocent, Mr. Mills. But that's the court's job to decide, it's not mine. My job is to bring you in and let the law take its course, that's it.
Bryan: Good luck.
Taken (TV Series)
"Good luck."