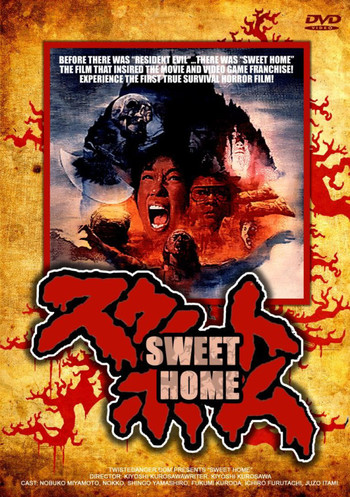 DVD re-release cover, trumpeting the influence it had by then.
Sweet Home (スウィートホーム) is a 1989 Japanese Toku haunted house horror movie that would be another obscure piece of cinema sought by horror enthusiasts... if it weren't for the Famicom game of the same name. Experiencing both, in either order, is necessary to fully appreciate the story. Since the trailer advertised both the movie and the game simultaneously, it's safe to say that this was designed as a cross-medium work, despite production on the game starting after production on the film did. Several events occur in a different order.
Advertisement:

The story of both the film and the game centers around a five-person crew that ventures into the long-abandoned mansion of famed artist Mamiya Ichirou with the intent of filming a documentary while attempting to restore Mamiya's works. Upon entering the mansion, the group discovers that the ghost of Lady Mamiya (Ichirou's wife) haunts the place — and they're trapped inside. The group must now attempt to find a way out alive...and possibly lay Lady Mamiya to rest once and for all along the way.

The film, like the game, has never been released in the States, though it is also similarly easy to track down.

Not to be confused with Chi's Sweet Home (couldn't be farther from it, really).