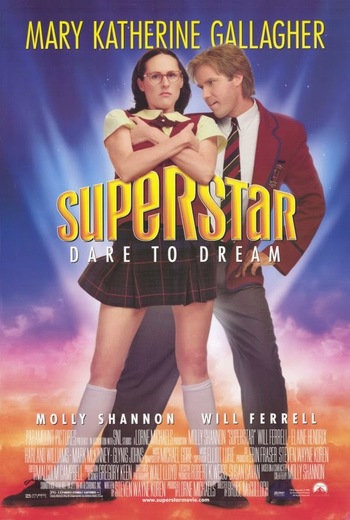 Mary Katherine is a teenage Irish-Catholic schoolgirl who dreams of being kissed, and decides the only way this can happen is to become a star. She daydreams all the time, so she is moved to the special education class at St. Monica High School.

A Catholic magazine is hosting a talent show — the Let's Fight Venereal Disease Talent Contest — at her school, and first prize is a role in a movie with good morals. Mary Katherine sees that her big chance is the talent show, and decides to enter even though her grandmother (Glynis Johns) has forbidden it. Mary Katherine's competition is head cheerleader Evian (Elaine Hendrix), who is dancing with the jock Sky Corrigan (Will Ferrell), the object of Mary Katherine's affections.

When Grandma Gallagher finds out that Mary Katherine went behind her back and enrolled in the talent show anyway, she tells Mary Katherine the truth about how her parents died: They were stomped to death in an Irish step dancing competition.

Despite this, Grandma Gallagher decides to help her win the talent show, and Sky's heart. However, another classmate, Slater (Harland Williams), is after Mary Katherine's heart.