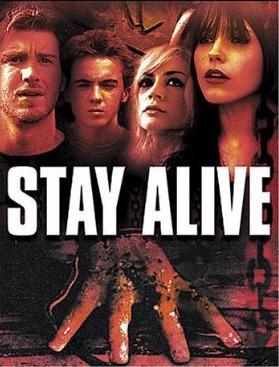 If you die in the game, you die for real.
—Tagline
Advertisement:

Stay Alive is a horror film written by William Brent Bell, who also directed, and Matthew Peterman. This film was produced by McG, co-produced by Hollywood Pictures and released on March 24, 2006, in the United States.

The movie centers on an online survival horror video game called Stay Alive, based on the myth of a figure called the Blood Countess, who was buried alive in the tower of her real estate in the Geronge Plantation. There's a good reason why this game is still in beta, though: the people who play it have a nasty habit of dying.

A group of twenty-somethings find themselves in possession of this particular video game after the brutal death of their friend, and soon discover that they are being murdered in the same way as their characters died in the game. Now they must race against time to defeat the spirit of the countess in order to escape the game.