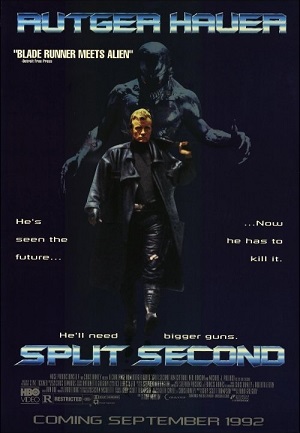 Durkin: If I were a religious human being and not a reasoning person I think I am, I wouldn't say that this thing thinks it's Satan. I say it is Satan.
Stone: Well, Satan is in deep shit!
Advertisement:

In the movie Split Second, Harley Stone (played by Rutger Hauer) is a cop who often flouts the rules working in a decaying, flooded London circa 2008 (the film was made in 1992), as Global Warming has caused sea levels to rise.

A supernatural killer that Stone is convinced exists has returned, and it's his mission to find the killer before anyone else dies. Unfortunately, his boss doesn't think he's stable enough to work without an assigned partner, Dick Durkin. Hilarity (and action-adventure) ensues.