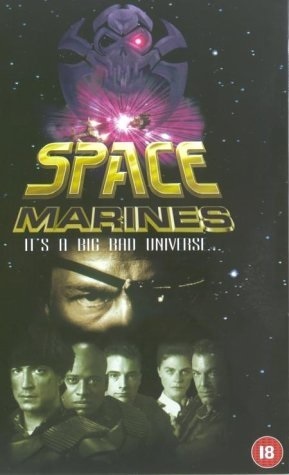 "They're bad motherfuckers who deserve to die."
— Space Marine Hacker, carefully explaining who the Space Pirates are.
Advertisement:

Not the Warhammer 40,000 CGI film but a 1996 action film that concerns itself with a bunch of Space Marines trying to recover a hostage from a gang of Space Pirates (complete with eyepatches), called the Infinity Brigade, led by John Pyper-Ferguson as Colonel Fraser. It doesn't go well. When kidnapping their hostage it turns out the pirates had also acquired a large amount of utrinium/antimatter, which Col. Fraser soon uses to make tiny, swallowable bombs.

After Col. Fraser blows up the hostage during the exchange he takes the ambassador, his aide and a disguised marine hostage instead, planning to use the ambassador as a human bomb to force the local galactic federation to give him tons of gold. And so the captured marine spends his time trying to escape from and/or defeat the Colonel while convincing the aide to stop being a bitch and start helping. The rest of the marines mount a rescue while struggling against the bureaucracy of the galactic security council and Pyper-Ferguson hams it up all around the set.