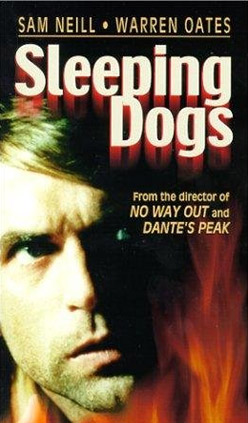 Sleeping Dogs is a 1977 action thriller film directed by Roger Donaldson, starring Sam Neill, Ian Mune, Nevan Rowe, and Warren Oates. It chronicles a man named Smith (Neill), living on New Zealand's Coromandel Peninsula, who inadvertently gets caught up in the unrest overtaking the country and finds he is unable to extricate himself from being involved.

Donaldson's directorial debut, the film is also notable as the first to be entirely produced and set in New Zealand.

If you were looking for the Hong Kong action game of the same name, it can be found here.