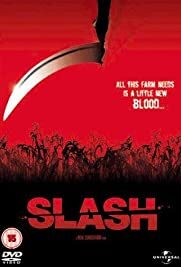 Joseph "Mac" MacDonald is the lead singer of the rock band Slash, which is currently on tour. When his aunt dies, the band make a detour to attend the funeral. While the band clash with the rural sensibilities of the locals, one of the farmhands tells them of an ancient tradition where Human Sacrifice was used to improve the year's crops. That night, a scarecrow-masked Serial Killer begins stalking the band and collecting their blood...

This film was distributed by Universal in Brazil & Germany, and Warner Bros. in the Netherlands.

No relation to the real life musician.