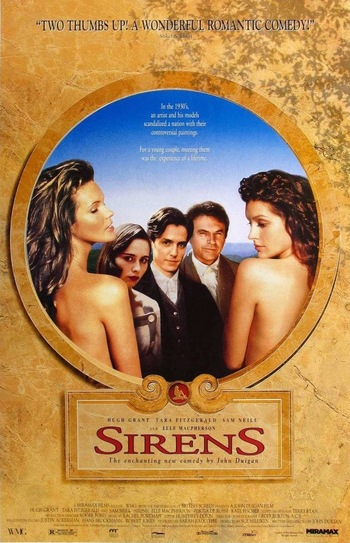 "In the 1930s, an artist and his models scandalized a nation with their controversial paintings. For a young couple, meeting them was the experience of a lifetime."
"Be seduced"
— Tagline
Advertisement:

Set in Australia between the two World Wars, the film follows Anthony Campion (Grant), a British Anglican priest, on holiday in Australia with his wife Estella (Fitzgerald). Anthony has been asked by a bishop to visit the artist Norman Lindsay (Neill) when his paintings have been declared too vulgar and offensive to be used in an exhibition. When visiting the artist's home, the couple are baffled and almost attracted by the free and loose ways that Lindsey's models (the "sirens" of the title) flaunt their sexuality. The film acts as a study into the psyche of Estella's mind as she fantasizes and begins to act on her impulses.

This was one of three films that brought Hugh Grant to the attention of American audiences. Also features Portia de Rossi (in her film debut) and supermodel Elle MacPherson in the cast.

Norman Lindsay was a real guy. 24 years before this movie, his life inspired another movie about an Australian artist and his sexy model, Age of Consent.

"Be seduced by these tropes":