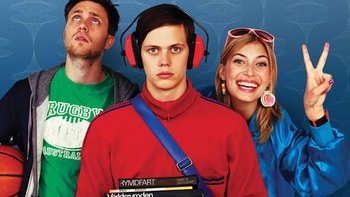 There are no feelings in outer space.
Some people think that I'm an idiot, but I'm not. I just want things to stay like they always have been.
— Simon in the beginning of the movie.
Advertisement:

The movie is about Simon, an 18-year-old boy with severe Aspergers and is suppose to live with his big brother Sam and his girlfriend Frida. But Simon doesn't like changes and has to change his routines vastly if he is gonna stay with Sam and Frida, which he does for Sam's sake. However, as Frida can't stand Simon she breaks up with Sam, leaving him depressed. Simon tries to find a new girlfriend to Sam, so that they can live as they used to. But Simon doesn't quite understand how people and their emotions work.Simon meets Jennifer who is quite the opposite of Sam and thus thinks she and Sam would fit well together. But Sam wants to be left alone.

Simon likes physics and math and thinks of problems and routines like equations, and think that people must work the same way. But what he doesn't comprehend is that people are a lot more complex than that.

Simple Simon has examples of:

Simon: Do you moan while having sex?
— Simon casually asking one of his questions to several girls.