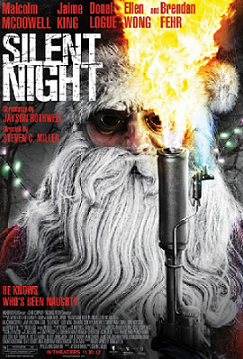 I'm dreaming of a bright Christmas.
Stein Karsson: Let me tell you about Christmas. It ain't all candy canes and pretty lights. Christmas can fuck you up. I heard this story. This fella was pissed that his wife left him on account of him being a dull man. She took up with a more exciting fellow. The husband was distraught. He went to the party they were at dressed as Santa, took with him a weapon, one he made with his own hands. And he set about killing them that was naughty. The wife's boyfriend ran, left her behind. She begged for forgiveness, pleaded for her life. He had no mercy for sinners, burnt 'em to a crisp. He's still doing it too, every year a new town.
Deputy Aubrey Bradimore: Everyone knows that story. It's an urban legend.
Stein: It ain't. Have you been a naughty girl, deputy?
Advertisement:

A killer Santa is killing anyone he deems naughty in a small town, and the law desperately seeks to stop him.

NOT to be confused with the Pulitzer-winning opera of the same name.