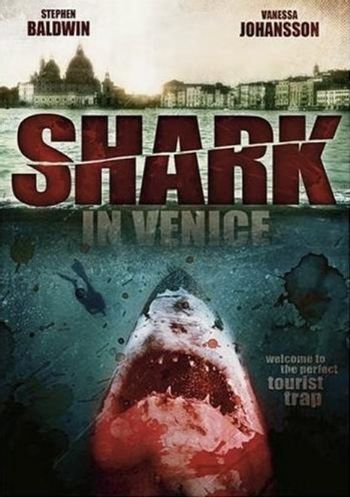 Does this look familiar to you?

David Franks, renowned diver, shark expert, and college lecturer, and his fiance dash off to Venice to investigate the mysterious disappearance of his father, who was doing some equally mysterious diving. It turns out that he was working for the mafia looking for the lost treasure of Marco Polo, which is conveniently hidden down an underwater tunnel just off the Canal Grande. He refuses to pick up where his father left off, and is soon being pursued by said mafia until he is forced to change his mind, with his fiance’s life on the line.

The sequel to Shark Attack 3: Megalodon that nobody wanted.

What Jaws managed to achieve with stock footage and a mechanical shark, this movie managed to fail miserably at with all of that, plus some extremely unconvincing CGI.

Shark In Venice provides examples of: