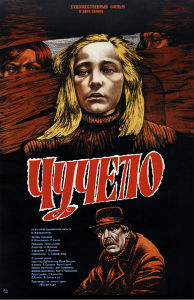 Lena is a new girl in school whom her classmates come to despise. After an incident for which she takes the blame because she does not want to see her friends get punished, the people turn against her, and even burn her in effigy. She and her grandfather are forced to leave town. But the children at the school regret what they have done, and at the end write on the blackboard "Scarecrow, forgive us!"

This film caused a huge shock to the public, who were used to depictions of the Soviet Pioneers as universally honorable and always willing to lend a fellow a hand. Now, there was a film showing just how cruel and treacherous even the Pioneers could be. Gos Kino wanted to stop filming, but the director Rolan Bykov successfully prevented any details from leaking out about the plot. Despite the controversy and the attempts at state intrusion, the film was shown, became popular, and won several awards.

Do not confuse with Batman villain Scarecrow, the Buster Keaton comedy The Scarecrow, or the 1973 movie Scarecrow starring Gene Hackman and Al Pacino.