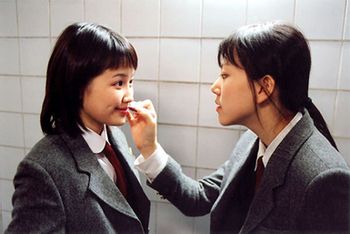 Samaritan Girl is a 2004 movie by Korean director Kim Ki-duk. The story deals with two high school girls, one of whom engages in freelance prostitution, while the other acts as her de facto pimp. When the first girl falls to her death trying to escape a police raid, the other seeks redemption by sleeping with all their former customers and giving them their money back. However, her father, a police detective, finds out about it and exacts bloody retribution from said customers.