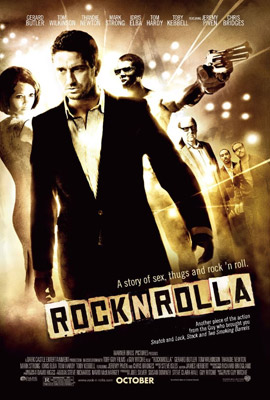 People ask the question... what's a RocknRolla? And I tell 'em — it's not about drums, drugs, and hospital drips, oh no. There's more there than that, my friend. We all like a bit of the good life — some the money, some the drugs, other the sex game, the glamour, or the fame. But a RocknRolla, oh, he's different. Why? Because a real RocknRolla wants the fucking lot.
—Archy
Advertisement:

In the midst of it all is a (presumably rare and valuable) painting that holds sentimental value for Uri. It is stolen by Lenny's estranged stepson John, AKA Johnny Quid (the eponymous RocknRolla), and both of their respective Dragons (Victor for Uri; Archy, the Character Narrator, for Lenny) are following a trail of junkies and hustlers in order to find it.