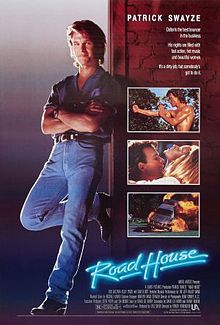 "Peter, the only 'message' in that movie is that every problem in life can be solved by kicking."
— Brian, Family Guy
Advertisement:

Road House is a 1989 film directed by Rowdy Herrington and starring Patrick Swayze. It is not related to the 1948 movie.

Dalton (Swayze) is a professional "cooler" (read: Bouncer) with a mysterious past who is hired to work for the Double Deuce in Jasper, Missouri. In the course of cleaning up the seedy roadside bar, he runs afoul of crime kingpin Brad Wesley (Ben Gazzara) who is extorting from the townspeople. A generous helping of Barfight Fu ensues.

A direct-to-DVD sequel, Road House 2: Last Call, was released in 2006 and replaced Dalton with his hitherto unknown son, Shane.

Mike Nelson: Yes, feathered hair and a mullet! His hair came to play.