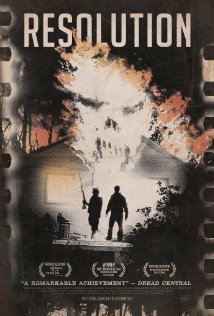 Resolution is a 2012 horror film directed by Justin Benson and Aaron Moorhead, written by Benson, and starring Peter Cilella, Vinny Curran, and Zahn McClarnon. Michael Danube (Cilella) receives a video depicting his friend from childhood, Chris Daniels (Curran), obviously in a bad state of mind, and possibly injured, along with a map. To the protestations of his wife, Michael heads out to find his friend and help him. When he arrives at the location, he finds a run-down house with Chris, who is both armed and high on meth. Michael decides that the only way to save his former friend is a cold turkey intervention. He subdues Chris with a stun gun, handcuffs him to a wall, and sets aside a week to let Chris dry out. Then, things get complicated.
Advertisement:

Chris owes a stash of drugs to the pair of Micah and Billy, two people that Michael and Chris had known in school, who are willing to use violence to retrieve the drugs. Chris is illegally squatting in the house, which sits inside of a Native American reservation. Chris is obviously unwilling to give up his drug habit, and doesn't want to be saved. Michael starts finding mysterious forms of media from records to film stock to DVDs which start out depicting horrific fates of those involved, and start to reflect and depict Michael and Chris. Oh, and Chris didn't send the video.

It soon becomes clear that someone, or something, is constructing its own narrative, and has made Michael and Chris the main characters.

It received a Stealth Sequel in The Endless in 2018.

This film depicts the following tropes: