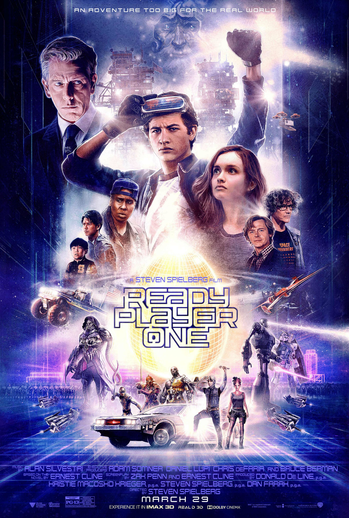 Are you ready?
"Come with me
and you'll be
In a world of pure imagination"
Advertisement:

Ready Player One is a 2018 film based on the 2011 novel of the same name by Ernest Cline. Directed by Steven Spielberg, from a screenplay co-written by Cline, the film was released on March 29, 2018.

In the year 2045, overpopulation has forced most of the world to live in crowded, polluted slum cities where the only escape from reality is the OASIS, a virtual world filled with games and social connections. When the owner of the OASIS dies, he leaves behind an Easter Egg somewhere within the virtual world that will grant its finder ownership of the OASIS and half a trillion dollars to go along with it. Now, Ohio-based teenager Wade Watts (Tye Sheridan) and a few friends seek to discover the treasure amongst the hordes of players who are looking to seize control of the OASIS.

The film also stars Olivia Cooke as Samantha Cook/Art3mis, Ben Mendelsohn as Nolan Sorrento, Lena Waithe as Helen Harris/Aech, T.J. Miller as I-R0k, Simon Pegg as Ogden Morrow/the Curator and Mark Rylance as James Halliday/Anorak the All-Knowing. Also, like the book it's based on, Ready Player One is Reference Overdosed, featuring important plot elements from other aspects of pop culture, such as The Iron Giant himself.

The film version of Ready Player One provides examples of:

open/close all folders
Tropes # to G
itself if they want to get someone in particular.
Tropes H to Z
Ask yourselves, "Are you willing to zero out for the OASIS? Are you willing to fight?"
In the name of James Halliday himself... Help us save the OASIS!
Advertisement:
Feedback