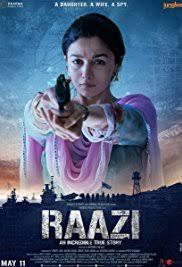 Guess who is staring down the barrel.

Raazi (or "Willing") is a 2018 Indian espionage drama directed by Meghna Gulzar and starring Alia Bhatt and Vicky Kaushal. Set in 1971, it tells the story of Sehmat (Bhatt), a 20-year-old girl from Kashmir, India, who is married off to the son of a prominent Pakistani army officer in order to spy and pass on military secrets to the Indian Intelligence. Sehmat fits in easily with her new family and genuinely loves her husband (Kaushal). But when it comes to choosing which comes first - family or country - there is never any doubt in her mind. How far will she have to go to accomplish her mission? What will be the collateral damage? Will she survive? Does it even matter, given that the nation's interests are at stake?