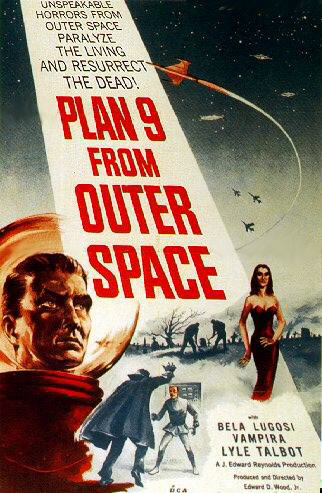 Can you prove it didn't happen?
"Greetings, my friend. We are all interested in the future, for that is where you and I are going to spend the rest of our lives. And remember my friend, future events such as these will affect you in the future. You are interested in the unknown... the mysterious. The unexplainable. That is why you are here. And now, for the first time, we are bringing to you, the full story of what happened on that fateful day. We are bringing you all the evidence, based only on the secret testimony, of the miserable souls, who survived this terrifying ordeal. The incidents, the places. My friend, we cannot keep this a secret any longer. Let us punish the guilty. Let us reward the innocent. My friend, can your heart stand the shocking facts about grave robbers from outer space?"
— Criswell, opening linesnote Note that this is billed as "Criswell Predicts", and he doesn't predict anything.
Advertisement:

Before there was The Room, Troll 2, Birdemic, the collected works of Uwe Boll, Baby Geniuses, Battlefield Earth, or even Manos: The Hands of Fate, this was the golden standard in bad filmmaking.

Plan 9 from Outer Space is a 1959 American black-and-white science fiction horror film written, produced, directed and edited by Ed Wood that was to change the world irrevocably, resurrect Bela Lugosi's ailing film career and be known forever as the greatest motion picture of all time. As it turned out however, Bela Lugosi was dead, while Ed Wood was a man of unlimited drive and determination, but had absolutely no talent as a writer or director. But for just those qualities, it is often considered the worst movie of all time. Hey, in this case, one out of three ain't bad.

A classic tale of Human Aliens creating a Zombie Apocalypse via administering "long distance electrodes shot into the pineal and pituitary gland of the recent dead". The police department investigate the mysterious rising of a dead old man (played alternately by Bela Lugosi and a much taller, younger man pretending to be Bela Lugosi by holding a cape over his face), his suspiciously young wife and Police Inspector Clay, who's "a big boy now, Johnny". Meanwhile, "army brass" battles the aliens with a combination of Stock Footage of artillery and impressive looking-through-binoculars in front of a curtain, only to reveal that the aliens have sent them messages that are often cut off by "atmospheric conditions in outer space".

The aliens land and meet with the police, the pilot and an army colonel and belittle the humans for their "stupid minds! Stupid, stupid!" The head alien, Eros, explains that humanity will "stumble across" a way to explode particles of sunlight, thus eventually destroying the universe. The movie climaxes with a fight between Eros and the pilot, followed by the spaceship taking off and exploding in mid air, leaving the reanimated corpses as skeletons. As they leave, Criswell says:

My friend, you have seen this incident based on sworn testimony. Can you prove that it didn't happen? Perhaps on your way home, you will pass someone in the dark, and you will never know it, for they will be from outer space. Many scientists believe that another world is watching us this moment. We once laughed at the horseless carriage, the aeroplane, the telephone, the electric light, vitamins, radio, and even television! And now some of us laugh at outer space. God help us... in the future.
Advertisement:

Every year, at the 24-hour film festival known as B-Fest, this movie is screened at midnight. There are a set of actions a la The Rocky Horror Picture Show that are performed with the film (yelling "DAY!" for day shots, "NIGHT!" for night shots, "NOT BELA!" for Bela's replacement, "BANG" whenever someone displays poor firearm safety, etc.).

Strangely, despite the sort of So Bad, It's Good kitsch the show usually reveled in, this movie was never riffed on by Mystery Science Theater 3000. (There is a RiffTrax of it, though, and they chose it for the first of what became a series of live shows.) Perhaps that's because it didn't really need the help...

Although the film's copyright was eventually registered in 1981 and renewed in 1986, its renewal is considered invalid. You can check the film out in Wikimedia Commons

and decide for yourself if this movie deserves its reputation.

a Direct-to-DVD remake in 2015 called "Plan 9", with the film taking place in the town of Nilbog.

Due to Small Reference Pools, Plan Nine From Outer Space is frequently used as a shorthand for "really bad movie", especially by film critics. For example, a movie review might read "Good Movie is Plan Nine compared with Excellent Movie."

Contrast with Citizen Kane, which is often considered the greatest movie of all time by film scholars (though Tim Burton actually dared to compare Plan 9 with Touch of Evil in Ed Wood).note To be fair, he was comparing the same moviemaking difficulties, such as producer-enforced casting decisions. Not to be confused with the Konami Adventure Game based on the movie.

If you're looking for the webcomic about a rock band called Plan9, who named themselves after this film, go here.