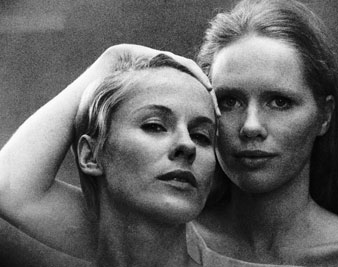 A 1966 psychological drama by Ingmar Bergman, starring Bibi Andersson and Liv Ullmann. As with much of Bergman's filmography, the movie rides heavily on symbolism and philosophy. Its plot is...hard to explain.

At first, it is pretty straightforward: an actress named Elisabet Vogler (Ullmann) suddenly decides not to speak and is thus considered mentally ill. She and Alma (Andersson), the nurse who takes care of her, are sent to a Summer cottage in hopes that it will help nurse the actress back to health. Alma talks to her a lot, first about trivial things and then about increasingly personal matters, among them a sexual tryst Alma had with underage boys. When Alma happens to read a letter from Elisabet to her doctor, which has references to the tryst and other things Alma told her in confidence, plus a comment where Elisabet says she's "studying" Alma, Alma begins to suspect that Elisabet is toying with her. Cold war ensues.

Whatever happens from there on is entirely up to you to guess. The director's lack of explanation does not help. However, it is still regarded as one of Bergman's best movies, and one of the greatest films of all time.

Unrelated to the Persona video games, although Jungian psychology is a major theme in both.