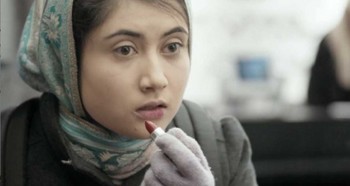 Parvaneh is a 2012 short film from Switzerland, directed by Talkhon Hamzavi.

Parvaneh (Nissa Kashaneh) is a refugee from Afghanistan who is staying at a refugee housing center. Her parents are back in Afghanistan and her father is ill, so Parvaneh gets a job sewing clothes under the table. She's paid a pittance and is heartlessly exploited by the Swiss man who employs her, but at least she now has money to send home.

Only she can't. It turns out that to wire money from Switzerland to anywhere you have to have a valid ID and be at least 18. Parvaneh fails on both counts. She goes out looking for a Swiss person to help her, and finds Emily, a white girl and German-speaking Swiss who's old enough. The two girls strike up a friendship.