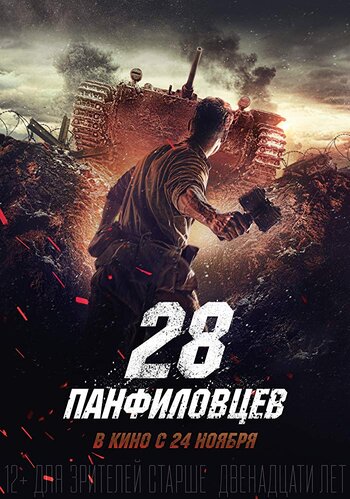 Panfilov's 28 Men (28 панфиловцев) is a 2016 film from Russia directed by Kim Druzhinin and Andrey Shalopa.

It is based on the legend of Panfilov's 28 Guardsmen

. The setting is November 1941. After five brutal months of war, the hordes of Nazi Germany are making their final push towards Moscow. The 316th Rifle Division is sent to the Dubosekovo railway station, on the western approaches to the capital. The men go through extensive anti-tank training, and they are smart enough to figure out that this signifies they will be facing the Germans soon.

On November 16, 1941, the men, led by political officer Capt. Klochkov and Sgt. Dobrobabvin, take their positions in the trenches outside Dubosekovo. They dig decoy trenches which lures the Germans to aim their artillery barrage for the wrong place, allowing the Russians to easily repulse the first charge. However, the Germans get the range, and their next bombardment does terrible damage to the Russians in the trenches. The 316th is left with only 28 men to defend that sector of trench...and the Germans are coming again.

The Real Life story of Panfilov's 28 Guardsmen became one of the legends of Russia's Great Patriotic War, an inspirational tale that inspired a huge monument at Dubosekovo and is memorialized in the anthem of the city of Moscow. It turned out to be totally made up.