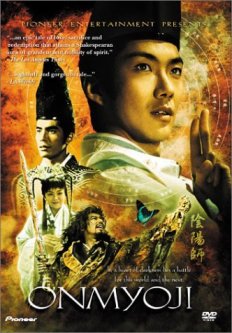 A 2001 Japanese fantasy film about Abe no Seimei and his companion Minamoto no Hiromasa, based on the stories by Yumemakura Baku. The sequel, named Onmyoji 2, came out in 2003.

Set during a dark fantasy version of the Heian Period, Onmyoji begins with the story of how Prince Sawara was banished for a crime he didn't commit, and how he swore eternal vengeance before killing himself. Cut to a long, long time afterwards, when Douson is leader of the Emperor's onmyoji, and Abe no Seimei is an ostracized (but powerful) loner. A mysterious lady pleads with Seimei for a love spell that will bring the Emperor back to her, but he refuses. Meanwhile, young court noble Minamoto no Hiromasa is in love - and also beginning a close friendship with Seimei.

What none of them know is that Douson is planning to bring down the Emperor. And then the newborn prince is cursed, Seimei is arrested and a demon stalks the Imperial Palace....

Onmyoji 2 is set some time after the events of the first movie and touches a bit more on Japanese Mythology, namely the gods and goddesses and the Izumo and Yamato clans. A demon is running loose in the captial, killing members of the nobility at random. What sets these murders apart from others is that one body part (an eye, the nose, a leg, etc...) on each victim is devoured for some unknown purpose. Fujiwara no Yasumaro, the current Right Minister to the Emperor, is worried about his daughter, Himiko, being possessed by the demon, as she started sleepwalking at night at the same time the killings began. The Emperor tasks Seimei with finding and exorcising the demon. Meanwhile, Hiromasa finds a new friend in Susa, a peasant boy, after following the sound of the latter's biwa melody. In the middle of all of this is the story about an Izumo village that was destroyed 18 years ago and the mysterious sword, Ama no Murakumo.

Behind the scenes, a mysterious man named Genkaku is employed by other members of the Emperor's court due to his "god-like" powers in a political gambit to bring disfavor to Seimei. However, Genkaku seems to be interested in other things....

Unrelated to the Chinese mobile game.