Film / One Plus One 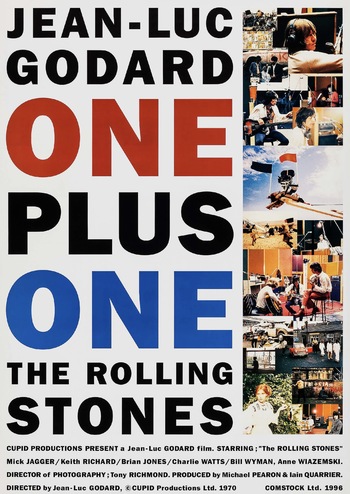 Godard originally intended to make a film about abortion, but on arriving in London he found that it had been legalised and nobody cared much about it any more. He then said that he wanted to make a films about either The Beatles or the Stones, but Beatles weren't interested, so he obtained the permission of the Stones to film them rehearsing and recording the song in Olympic Studios in the summer of 1968, and shot a number of other scenes in and around London, depicting the Black Panthers reading from revolutionary writings, and his then-wife Anne Wiazemsky being followed around by an interviewer asking her questions, to which she only replies either "Yes" or "No".

Godard delivered the film, and its producer Iain Quarrier was annoyed to discover that it didn't contain a single performance of the finished song, so Quarrier tacked that onto the end and retitled the film Sympathy for the Devil. Godard was highly annoyed about this, to the point that he punched Quarrier in the face at one of the first screenings of the film. Many DVD editions of it contain both versions.

It's watched today mostly by either hardcore Godard fans, or people interested in the Stones' working methods—of which there is plenty of footage, thanks to Godard's habit of doing very long takes.