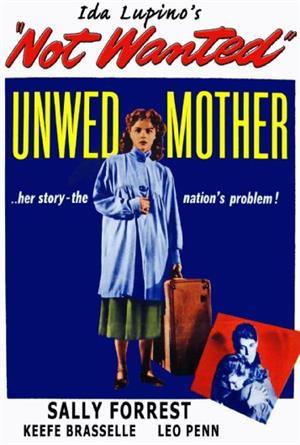 Not Wanted (1949) is a drama starring Sally Forrest, Keefe Brasselle, and Leo Penn. The film is credited to Elmer Clifton as director, but his heart attack, Ida Lupino took over directing.

The film follows Sally Kelton (Forrest) a young, naive girl who falls in love with a no-good pianist Steve (Penn).Her unsympathetic parents would never understand her love, so she runs away to the big city following Steve, but he crassly rejects her.In the city, she meets friendly, pragmatic Drew (Brasselle) who gives her a job, and they eventually fall in love.

But Sally soon finds out she’s pregnant with Steve’s baby. Deeply embarrassed about her unwanted pregnancy, she finds refuge in an institution for unwed mothers and decides to give it up for adoption, citing that although she loves her baby, she has no financial security to offer.

Although not an issue now, unwed mothers was a taboo topic in the late 40s and tackling this issue head-on in a film was extremely rare.