Film / No Way Out 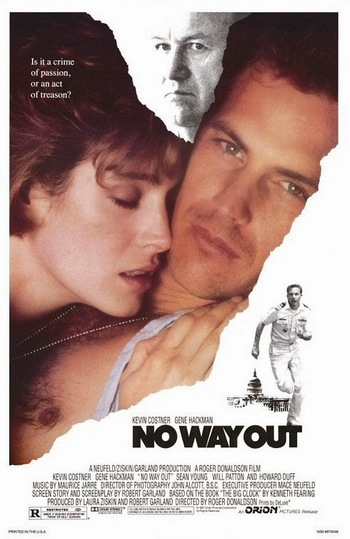 "Is it a crime of passion, or an act of treason?"
— Tagline

No Way Out is a 1987 thriller starring Kevin Costner, Gene Hackman, and Sean Young, about a U.S. Naval officer who is falsely accused of murder. The supporting cast includes Will Patton, Howard Duff, George Dzundza, Jason Bernard, Fred Thompson, Iman, and Brad Pitt in his first film role.

Lt. Cmdr Tom Farrell (Costner) is on a Pentagon tour after some at-sea heroics bring him to the attention of Defense Secretary David Brice (Hackman), who shows an interest in grooming the up-and-coming officer for things political. His mistress, Susan Atwell (Young), is attracted to Farrell in other ways. When Brice discovers that she is cheating —but not with whom — he flies into a rage and accidentally kills her.

Brice's aide, Scott Pritchard (Patton), decides that the best way to cover up the affair is to blame Atwell's death on a Soviet mole, stirring up a hornet's nest in the Pentagon as they try to discover his identity. Their best clue is a damaged Polaroid photograph that is given to the image processing team to enhance. Naturally, Farrell knows the photo is of him, which is ironic considering he's been appointed the investigator of the murder. He thus sets out in a desperate race against time and Pritchard's growing suspicions to prove that Brice is the real killer so that he'll call off the investigation. But what if there really is a mole?

A remake of the 1948 Film Noir The Big Clock. Not to be confused with the 1950 film starring Sidney Poitier or the WWE wrestling pay-per-view.

SPOILER WARNING: The trope list below contains a large number of plot spoilers. Read at your own risk.