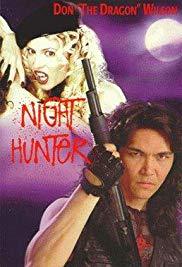 Wooden stakes and silver bullets can't save you now ... You better pray Jack Cutter can.
Advertisement:

Jack Cutter is a vampire hunter. Skilled in many forms of combat, he is a bane to creatures of the night the world over. There's just one problem: He's the Last of His Kind, and the undead outnumber him significantly. After he kills a few bloodsuckers in LA, he's on the run from the police and other vamps. Can he survive when he's outmanned and outgunned?

Not to be confused with 2019's Night Hunter or The Night of the Hunter.