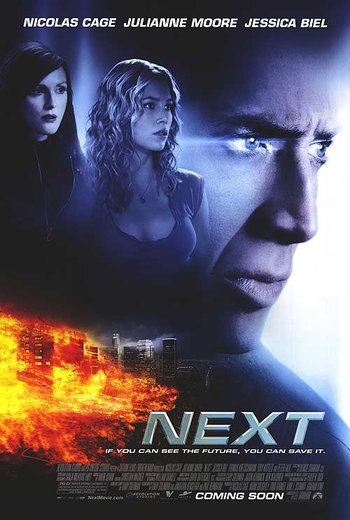 Next is a 2007 science fiction thriller film starring Nicolas Cage, Julianne Moore and Jessica Biel. It is loosely based on the short story The Golden Man by Philip K. Dick.

Showroom magician Cris Johnson (Cage)'s secret is that he can see a few minutes into the future. The one exception is a mysterious woman he has never met, whom for some reason he keeps having visions of.

Sick of the examinations he underwent as a child and the interest of the government and medical establishment in his power, he lies low in Las Vegas, performing cheap tricks and gambling.

When a terrorist group threatens to detonate a nuclear device in Los Angeles, government agent Callie Ferris (Moore) must use all her wiles to capture Cris and convince him to help her stop the cataclysm. While running away from her, Cris runs into the woman from his visions, Liz Cooper (Biel) and they fall in love, but this endangers her as well when the terrorists find them.