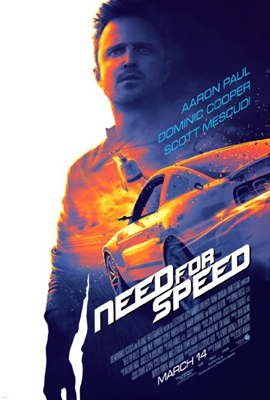 The one where NFS went to the silver screen.

Need for Speed is a 2014 action racing film that is based on Electronic Arts' popular action Racing Game franchise of the same name (if the film's name and use of the series' Undercover-introduced typeface haven't tipped you off already) that is directed by Scott Waugh and stars Aaron Paul, Imogen Poots, Dominic Cooper, Michael Keaton, and Kid Cudi (credited by his real name Scott Mescudi in the poster to the right). It is produced by DreamWorks, but distributed by Disney via their Touchstone Pictures label. In the film, Paul plays a mechanic named Tobey Marshall who races across the country after being released from prison for a crime that he was framed-up on in order to avenge the death of a close friend named Pete (Harrison Gilbertson).

One thing that should be noted about the film is that the filmmakers refused to use CGI for the chase sequences, instead using practical effects with actual cars (with CG only being used for enhancements at most). Being based on a game series known for ridiculous stunts, this should be taken with extreme awesome. The actors had to receive several driving lessons to accommodate this, and it shows.

A sequel was slated in the works, this time backed by Chinese Movie Channel, Jiaflix and 1905.com,

which were the same Chinese companies who supported Transformers: Age of Extinction. However, no word has come out of this development since, likely suggesting that the sequel's been cancelled.

Tropes appearing in this film adaptation include: