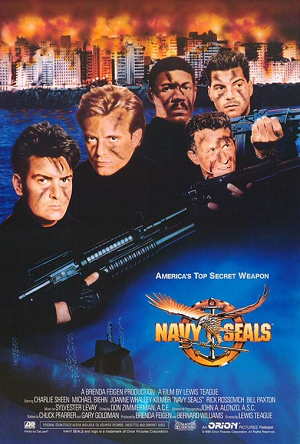 "We go in there, we hit 'em and forget 'em. That's what we do!"
—Lt (j.g.) Dale Hawkins, Second in command
"There is more to it than that."
—Lt James Curran, Team Leader
Advertisement:

Navy Seals was a 1990 Orion Pictures film starring Charlie Sheen, Michael Biehn, Bill Paxton, Rick Rossovich and Joanne Whalley, then wife of Val Kilmer. After the huge success the navy had with recruiting with Top Gun, they backed this movie too, hoping it would similarly drive up interest in the Navy SEA Ls. The screenplay was written by former DEVGRU (SEAL Team Six) platoon commander Chuck Pfarrer, who would go on to have some success as a Hollywood screenwriter, penning the scripts for Darkman, Hard Target and a few others.

This movie however, didn't have either the commercial and critical success of Top Gun, nor did it have the impact on recruiting that the navy hoped for. Their effort two decades later, Act of Valor would have more success. The movie revolves around a squad headed by Lt. James Curran played by Michael Biehn, which stumbles onto a large cache of Stinger shoulder fired anti aircraft missiles, while rescuing a captured Navy rescue helicopter crew. Unable to deal with the missiles at that time, the team spends the entire movie trying to find them. After seeking out the help of a television correspondent Claire Varrens played by Joanne Whalley Kilmer, the team first renditions a guy who may know the missiles' location. They finally launch a raid deep into the slums of war torn Beirut to neutralize the missiles and the terrorist group planning to deploy them.

A secondary plot concerns the personality clash between Curran who takes his job seriously, and his second in command, Lieutenant junior grade Dale Hawkins (played by Charlie Sheen) who is a thrill seeker that just enjoys a good fight. The two finally clash after a careless mistake results in a tragedy.

Tropes positively identified in this movie are: