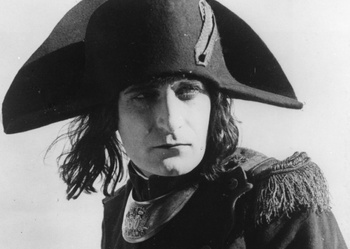 Napoléon is a 1927 silent historical film written and directed by Abel Gance and starring Albert Dieudonné in the title role.

The film covers the years 1783-1796, following Napoléon Bonaparte on his rise from a young student at a military academy to a senior general in the armies of France, as the country is shaken to its foundations by The French Revolution.

It's one of the earliest examples of Epic Movie in French cinema, running around 5 1/2 hours depending on which version one watches. The film includes many innovative camera techniques, most notably the use of "Polyvision", an early attempt at widescreen cinema done by stitching three conventional camera shots together (widescreen in general did not come into use until Hollywood studios adopted the format in the 1950s).

Planned sequels which would have followed the rest of Napoleon's tumultuous life were never made, although Abel Gance still reused some of the ideas for these in his 1960 film Austerlitz.