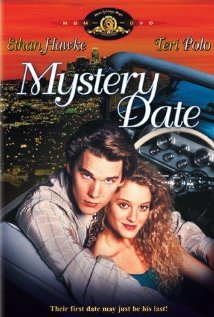 Mystery Date is a 1991 teen comedy film directed by Jonathan Wacks and starring Ethan Hawke, Teri Polo, and Brian McNamara. Hawke plays Tom McHugh, a teenage boy who's waiting for the perfect time to ask out the cute girl next door. Tom's older brother, Craig, ostensibly a lawyer in California, show up and sets the date up, furnishing Tom with new clothes, a new haircut, and money for the evening. Before the night is over, Tom's been slapped repeatedly by women who know Craig, he's shot somebody, and he may have fallen for this girl. Oh, and there are two bodies in the trunk...

For the board game, see here.