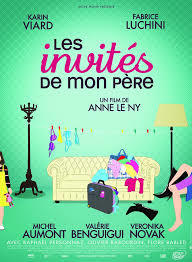 Lucien Paumelle (Michel Aumont), a retired physician who has always been involved in humanitarian causes, informs his children Arnaud (Fabrice Luchini) and Babette (Karin Viard) that he will host a clandestine family in his flat. It turns out the said family is Tatiana (Veronica Novak), a young Moldovian, and her daughter Sorina (Emma Siniavski). Lucien is actually in love with Tatiana.

My Father's Guests provides examples of: