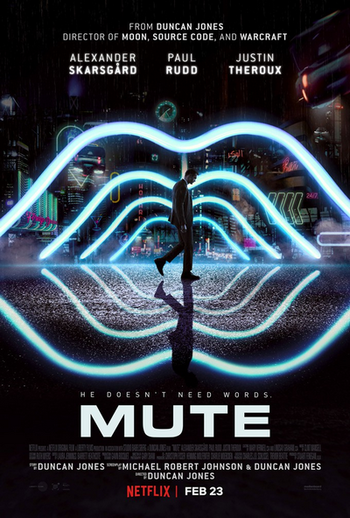 Mute is a Netflix original film directed by Duncan Jones, who co-wrote the script with Michael Robert Johnson. The film is in the same universe as the earlier Moon (although there's no direct connections between the two films), and was released on February 23, 2018.
Advertisement:

It follows the story of Leo (Alexander Skarsgård), an Amish bartender rendered mute by a childhood accident, as he searches for his missing girlfriend Naadirah (Seyneb Saleh) in a cyberpunk near-future Berlin. Parallel to Leo's story, the film follows the exploits of Cactus Bill (Paul Rudd) and Duck (Justin Theroux), two American black market surgeons possibly connected to Naadirah's disappearance.