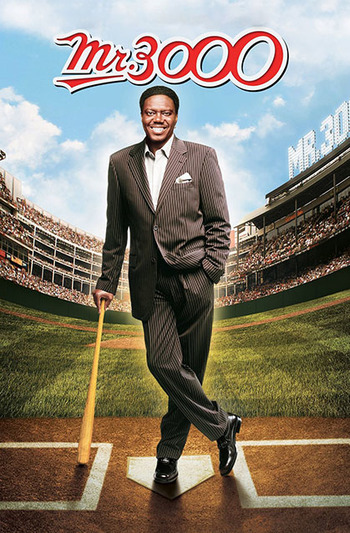 He's Putting the "I" back in "team."
Advertisement:

Mr. 3000 is a 2004 American Sports Comedy starring Bernie Mac and Angela Bassett. The film's plot surrounds a retired Major League Baseball player who makes a comeback at age 47 in order to attain 3,000 hits.

Stan Ross, a star player for the Milwaukee Brewers, retires from baseball immediately after recording his 3000th base hit, leaving his team high and dry in the middle of a playoff run.

Over the next few years, he takes advantage of his Red Baron "Mr. 3000" to make a lot of money. However, it's revealed that, due to a clerical error, he only finished his career with 2997 hits, which results in him not getting voted into the Baseball Hall of Fame and makes his "Mr. 3000" marketing gimmick inaccurate.

Ross decides to unretire and come back to baseball to get three more hits and re-secure his place in history. However, since he's now 47 years old, it's going to take a lot of work for him to get back in playing shape.