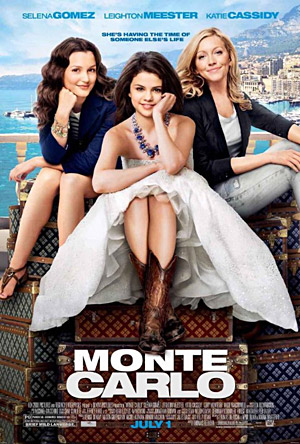 In fairness, they did get Katie Cassidy's placing right.
Advertisement:

Gomez plays Grace Bennett, a recent high school grad from a small town in Texas set to experience her life-long dream of spending a week in Paris. Accompanying her is her best friend and fellow waitress Emma (Cassidy). Grace reluctantly agrees to allow her step-sister Meg (Meester) to accompany them at her mother's insistence (and in exchange for a business class airline upgrade).

Once in Paris, the trio find themselves having a miserable time on a whirlwind tour that hardly allows them to see anything, made worse by constant bickering and deplorable hotel room conditions.

Things change for the girls, however, when they miss their tour bus and have to walk back to their hotel. Taking shelter from the rain in a five-star hotel, the manager mistakes Grace for one of his guests, namely the rebellious and abrasive English socialite Cordelia Winthrop Scott (also played by Gomez).

When Cordelia skips off to Spain without informing anyone of her plans, Grace takes on her identity, and convinces Emma and Meg to accompany her to Monte Carlo, where Grace will pose as Cordelia for a charity auction.

Complicating matters are the appearance of Cordelia's Aunt Alicia (Catherine Tate), and an unexpected romance with Théo (Pierre Boulanger), the son of the charity's director. Romance also ensues for Meg in the person of Riley (Luke Bracey), an Australian former rubgy player traveling the world to celebrate his new lease on life after recovering from an accident.

Originally intended as a vehicle for Nicole Kidman (who still served as one of the film's producers) and Julia Roberts: this

explains how it went from toplining Nicole Kidman to toplining Selena Gomez.