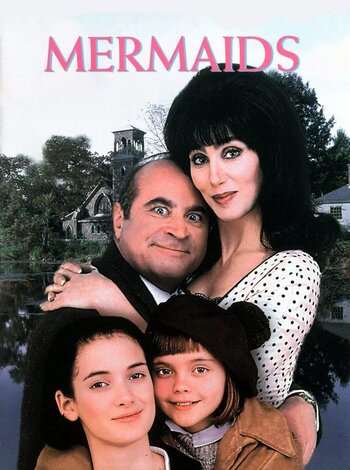 Mom Is Many Things. . .Normal Isn't One of Them.note Clockwise from bottom left: Charlotte, Lou, Rachel and Kate.
"Charlotte, I know you're planning a celibate life, but with half my chromosomes, I think that might be tough."
— Rachel Flax
Advertisement:

Mermaids is a 1990 dramedy directed by Richard Benjamin, starring Cher, Bob Hoskins, Winona Ryder (who was nominated for a Golden Globe), and Christina Ricci (in her first film role). It is based on the 1986 novel of the same name by Patty Dann.

In the early 1960s, Rachel Flax (Cher) is what used to be called a "loose woman". She's also the mother of Charlotte (Ryder) and Kate (Ricci), who are forced to move from town to town to escape their mother's failed relationships. Defiantly sexy and nonmaternal, Mrs. Flax is a constant source of embarassment to the older Charlotte, who turns to prudish dress and behavior in reaction to her mother's reputation. Charlotte fantasizes about being a nun, and is thrilled when their move to Massachusetts puts them a stone's throw away from an actual convent. Yet proving to be even more thrilling is the handsome handyman Joe (Michael Schoeffling), who works for the nuns. Charlotte is terrified that her attraction to him means she'll turn out just like her mother.

Meanwhile, her mother is having some problems of her own. The town's genial shoe salesman, Lou Landsky (Hoskins), seems good for a few laughs. Unfortunately, he digs his heels in and wants a real relationship with Rachel, and doesn't go away no matter how badly she behaves.

Interestingly, this movie was 110 minutes long and made $110 million, meaning that each minute of the film was worth exactly one million dollars.

Not to be confused with Mermaids 2003.